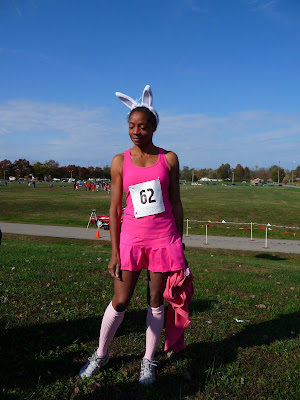 Today I ran my second race of this week, the Grand Avenue Pumpkin Two Mile Run/Walk. Here are my observations.

This race was held last year and I had a blast. The race organizers encourage people to dress up in costume for the race--I was the only adult in costume last year, but that changed this year. I saw a man dressed as an orange traffic cone, a mother-daughter pair dressed as cop and prisoner (mom was the cop, the daughter was in the prison stripes), and folks dressed as pumpkins. I was a bunny this year (as compared to last year's tiger). I had bunny ears, which miraculously stayed for the entire race, and a fluffy tail to shake.

So many more people came out this year than last (which means I was shut out of the awards this go-round: last year I took third in my age group and won the costume award). A lot of folks signed up on site, which the organizers weren't expecting. It took a while to get everyone registered. Some didn't get a T-shirt, which I heard a little whining about here and there. I always send my race registrations in early, so I got one.

This race is only two miles, which causes some runners to underestimate it. I was actually torn on doing this race again since it is so fast. There are folks who can tear it up speed-wise (the winner was in at 9:53); if you try to keep up with them, you're toast without butter. Though I loved doing the race last year, I do remember sneezing and coughing A LOT afterward. It was if I had hay fever after. This year I was a bit slower than last (16:02 last year, 16:17 this year), and the sneezing and coughing, while present, was nowhere near as bad. This sneezing/coughing reaction does not happen to me after 5Ks, so I can only speculate that running faster than I'm used to for such a short time brings on this reaction.

My favorite moments during the race? I heard someone say ruefully as I passed them early in the race, "I just got passed by a bunny." As I was running the final stretch, I heard someone yell out "Yeah, Bunny!"

The race was over very quickly, but there was a raffle/award ceremony that took a while to get coordinated. The young women organizing the race (check their website here: http://thebutterflyyeffect.webs.com/) must have been overwhelmed by the onsite registrations. Though I didn't win, place or show in my age group, I was really happy to be in the 16s, which I did not expect to happen. Speed is amazingly relative, isn't it?
Posted by Allison J. at 6:08 PM