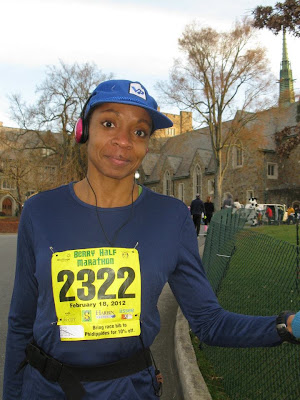 Today I ran my tenth half marathon, the Berry College Half Marathon, in a time of 2:05:16. I'm away from home on a slow internet connection, but will post a full race report when I return to my own laptop, which I didn't bring :(
But I will say this was a great race in a beautiful setting!

2/20/12: After getting home, I now have time to reflect and write my race report!

1) Destination race: For most runners, a destination race is an event in an exotic faraway place, or maybe is a race set in a place with warmer temps and luxury shopping. Doing the Berry College Half Marathon was a destination race for me. I had the good fortune to visit Berry, a beautiful college located an hour outside of Atlanta, GA, several years ago when I was a visiting poet. This time I again had the opportunity to give a poetry reading. The day after my reading, I ran the half marathon, and later in the day, I met with Berry students for a Q&A session about poetry and writing. This may not be someone else's idea of a destination race, but for me, a poet who runs, it was perfect.

2) A scenic race in a scenic place: Berry has one of the most beautiful campuses in the country, with ornate gothic buildings and acres and acres of green space! This race essentially had two components--the first part led us up to the mountain campus, where the school's original buildings are, and the second part brought us back to main campus via the Viking Trail, a flat, somewhat narrow paved path with Georgia pines on either side. Up to the mountain campus was tough--I saw a lot of folks walking. I did not, because of my fear about not running again if I start to walk!

3) College spirit: I love doing races on college campuses. There are always a lot of volunteers, and there's a real community spirit on race day. In addition to the half marathon (which was the sixth one done at Berry), there was a 10K, a 5K, and a fun run for the kids. There was an all-you-care-to-eat pasta dinner the night before the races, and abundant post-race reception food. Out on the course, there were six water stations. Gatorade, GU and shot blox were also available on the course. The only glitch was that they ran out of safety pins for the race bibs!

4) This was not a huge big-city race (about 600 did the half), but there were a lot of nice touches nonetheless: a medal for all half finishers, a wicking t-shirt, lots of freebies in the goody bag (including a coupon for money off the GA marathon). Timing was quick and efficient due to built-in chips on the race bibs. You went to a little table, gave your bib number and a few seconds later, you received a little print out with your chip time--very efficient.

5) The race did not have pace groups, but just before the race began, I was handed the 2:15 pace sign and told to stand there with it. So runners proceeded to line up behind me, asking "are you the pace runner?" I quickly corrected anyone who thought I was going to lead them to a PR! I thought back to my race in Madison, and how the two runners who lead the 2:10 pace group had to hold that sign high for 13.1 miles (they did switch it back and forth between them, but still). As soon as the race started I handed the sign off to a volunteer!

6) Travel considerations: This is the first time I've travelled alone to a race. I'm actually more tired from my travel on Sunday than from the race on Saturday. I want to thank my friend, poet and Berry professor Sandra Meek, for taking my race photos. If and when I travel solo to another race, I will make sure I have the following things: a rolling duffel bag (carrying my duffel by hand quickly got old), noise cancelling headphones (in addition to whatever headphones I use for the race itself), earplugs and eyeshades (sleepmask). All of those things would have made my travel more pleasant.
Posted by Allison J. at 6:20 PM