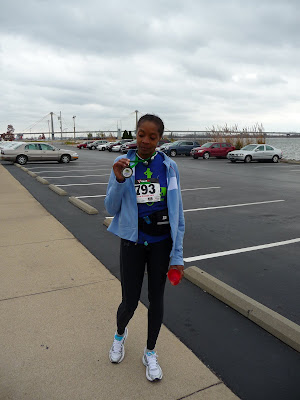 Today I ran the 52nd Annual Great River Road Run (Alton, IL) ten mile race. My chip time was 1:34:35. Here are my observations from the day.

1) After my failed 15K last week (Reveal Turkey Trot, Herrin, IL), I wanted to redeem myself and end my first full year of doing races on a better note. Several of the runners at that race mentioned this one--a 10 mile race in Alton, IL (about two and half hours from where I live). They said there's no way I could get lost on the the fast, flat course: five miles out, five miles back with the Mississippi River for scenery. I signed up and looked forward to getting a re-do with a race that's about the same length (15K is 9.33 miles).

2) Runners warm up for a race in all sorts of different ways. Some do sprints and drills and all sorts of stretchy acrobatics; some drink coffee; and some line up for the portable toilets. Jon (husband and runner support) dropped me off early, so I had no problem with lines at the toilets. I warm up by dancing: yes, dancing. I figure I'm about to run 10 miles, so why do I need to run right now? So I put on my headphones and shook my booty right on the corner of State and Broadway. I had some super tunes too--Marvin Gaye, Rick James, Chaka Khan, and Jermaine Jackson's epic "Let's Get Serious," with Stevie Wonder bringing the funk on backup vocal. Runners often get way serious before a race--but I want to have fun before any difficulties start! I figure the race will be tough enough.

3) Once again, I forgot my Garmin or even any kind of watch. This is so odd, because I don't ever leave my house for even a short run without one of my many Garmins strapped to my wrist. To have forgot a device that I previously thought essential means it must not be essential at all. To keep the pace, I'd pick out runners to keep in my sights (not necessarily to pass them, but to keep them within eyesight). If I did pass my pace runner, I'd pick a new one. My pace runners are usually other women, and there were lots of women at this race. The announcer stated before we started that there were more women than men running the race.

4) This was my first 10 miler, so it was automatically a PR. I enjoyed running next to the Mississippi and the Piasa Bluffs. Alton is an old river town, so there was something very powerful about running next to the river that has influenced so much of this country's history. Since this race was an out-and-back, I had no chance of getting lost, and I got to see the really fast winners come back toward me as I was headed to the five-mile turnaround point. The male winner did it in under 50 minutes; the top woman was in at 1:03!

5) This is a race with its own set of unique rules. It's not a half-marathon (Alton now has a half-marathon which I hope to do in the future). But with this race, the age groups are huge--0-39, 40-59, 60-99. Medals are awarded to the top 50 in each age group. So it is not a race where everyone gets a medal. I certainly didn't expect to get one! Imagine my surprise when I came through the finish chute and one of the volunteers handed me a medal. I made top 50 in this super huge age grouping!

6) Speaking of volunteers, there were plenty of them. But if you are looking for a race with a lot of frills (bands on the course, free GU, lots of cheering spectators), this is not the race for you. But if you are fine without those things, this is a great race. I got the feeling that a lot of the people had done this race before (one woman I talked with said it was her fifth time). This race is not advertised in the running magazines--it relies on word of mouth. Word of mouth among runners is a powerful thing though, and I thank those wonderful folks in Herrin who told me about this race.