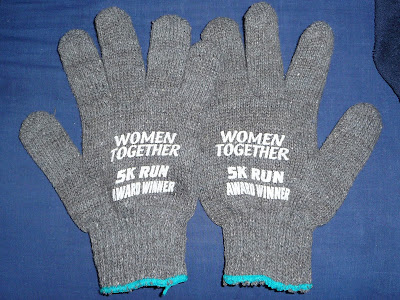 I have a confession to make. I hate 5Ks. Strange thing for a runner to say, but I'm not naturally gifted with speed. I'd rather run 13 miles in 2 hours and change than run 3.1 and feel like I'm not fast enough. 5Ks are fast races and I am never happy about my times. But that aside, I signed up for this local race for several reasons far more important than my own selfish need for speed.

First, this race benefits our local woman's shelter, the Women's Center of Carbondale (which serves many more counties than Jackson, the county Carbondale is in). The Women's Center has had to face a $275,000 budget cut at a time when more and more women and children are seeking its services. Knowing that we were raising money for such a great cause makes me feel that it does not matter how fast I finish.

Second, this is an all-women's race (men ran the course unofficially, sometimes spotting a female runner, but they did not go through the finish chute and were not eligible for age group or overall awards). This is important since many women are still intimidated by the prospect of running, and need to feel there's a race "of one's own," to borrow a phrase from Virginia Woolf. I am not a big fan of the "Princess Half Marathons" where everything is cutesy and stereotypically pink, but this race is a home-grown community event sponsored by my local running club, so it avoids all those touches.

I ran this one in 26:04, better than my last 5K (26:56), but not better than when I ran this last year. I did win my age group, which was nice (see age group prize in photo). This is my last 5K in the 40-44 age group--the next one I do will be in 2012, most likely after my 45th birthday. I'm not looking forward to the age group change--the really fast women runners around here are 45-over 50 and they smoke me. I was talking to one woman whose daughter is on our university track team. She was elated because she'd set a PR at today's race. When I asked what it was, she smiled and said "I finally got under 22!" Wow. She's only a few years older than me, the mother of two, and she's that fast. This, my friends, is called runner's envy. It's an incurable condition, because there will always be someone faster than you. But when the race is for a cause as good as this, what does it matter? It really doesn't.
Posted by Allison J. at 9:04 AM